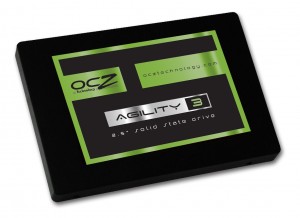 The drive comes all by itself. No SATA cables or a 2.5 to 3.5 dock. This wasn’t too much of a problem as I already knew about it ahead of time so I was able to purchase the two from Newegg.

The drive itself is small, compared to a standard HDD, and black with a green sticker. It takes the standard SATA data and power cables.

It was actually a bit disappointing with the boot times on this SSD. I was expecting to hit my desktop almost instantly from the time I turned on the computer. Instead it takes about 40 seconds to reach the desktop from a cold boot. At least this was an improvement of the almost two minutes it took with my previous hard drive. So although it may not boot as fast as other solid state drives on the market, it significantly improved my personal computers boot time.

Here is a video I made comparing the two. Since the video I have made a few tweaks such as re-installing windows and disabling more services that I didn’t need. The only problem I see left is the ridiculous time my silly BIOS takes to start up. If the BIOS were instant by boot time would be cut in half. Ohh well, to the Windows desktop in less than a minute is fine.

The numbers and real life uses are what always determine the quality of the drive. Below you will see the numbers from various tests I have made. These tests include how long the system takes to boot. How long Photoshop CS6 takes to launch. How long Firefox takes to launch. How long Chrome takes to launch. And a few others. If there is a program missing that you would like me to test, please leave a comment and if I can I will test it. I also have an actually speed test benchmark I made using a piece of software called CrystalDiskMark. This shows the read and write speeds for variously sized files. As you will see, the drive performs VERY well with small files which is the way the drive was originally designed. 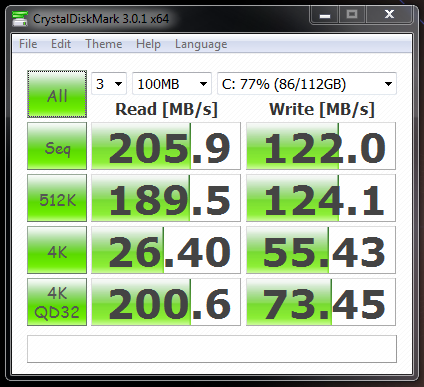 The speeds aren’t anything to go crazy for, as compared to other SSDs on the market, but they are indeed an improvement from my HDD. The real increase in speed over a conventional hard drive is with small files. My HDD got 1.28 MB/s read on the 4K QS32. The SSD received 200MB/s.

The OCZ Agility 3 is a great entry level SSD. If I would have spent more money and got an Intel SSD without a doubt my boot speeds and benchmarks would be much faster but I would also be out a lot more money. This $60 SSD is amazing. My system boots twice as fast and programs launch much more quickly. If you don’t have a ton of money to spend and want to get a taste of solid state drives, I would definitely recommend the OCZ Agility 3.