CrashPlan itself is a free to use program for maintaining and archiving backups for your computer. It is a very advanced backup solution allowing you to backup to locations such as an external hard drive, another hard drive within your computer, another computer, as well as a friends computer. It also offers the optional ability to use the paid backup solution from CrashPlan as a destination.

I was really amazed with the features in the program. It has many useful features that I use. One is the ability to scheduled backups to only occur during certain hours and days of the week. This is useful for me as I can have the backups automatically operate during the night, when Internet usage is low. Another cool feature is the ability to set how many versions of a file should remain backed up. You can adjust these frequencies based on days, months, and years. For example, you can have it retain a single monthly backup but still take daily backups that would be cleared out as new ones are created.

There are many other awesome features but those are just a couple of my favorites.

CrashPlan Central is the service offered by CrashPlan themselves to allow you to create backups to the cloud. It is a reasonably prices backup solution. For about $50 a year you are able to backup an unlimited amount of data from one computer.

Another benefit to having a CrashPlan Central subscription is the ability to use their mobile apps. They have apps for Android, Windows Phone,  and iOS that allow you to access your files on the CrashPlan could at any time from your mobile device. This is most useful for retrieve files on the go. Think of it as an unlimited Dropbox plan, allowing you to access thousands of GB worth of files at any location and time. Very convenient. 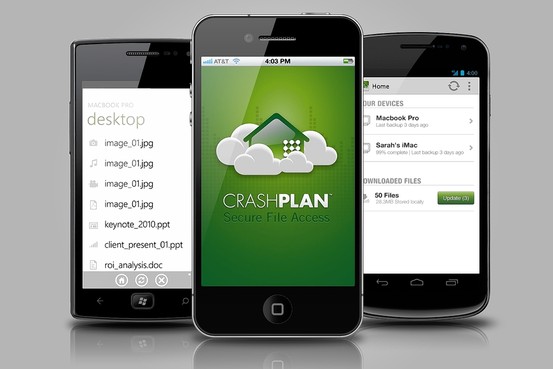